The moment we crossed the Garonne and wandered between the seas (Entre deux Mers), I felt my mind relax a bit from the questions that had been racing through my mind in previous days. To the left and right, there were farmers and humble vineyards lining the way. No glitz, no glamour. No grand Château x. Just dirt, vines and people doing their winter pruning their double guyot trained vines (a healthier few feet higher compared to those across the way). Here, French was the language. And while one person at each visit understood English well to help assist with technical descriptions, one could ascertain that these areas of Fronsac, Blaye and Bourg were hardly overwhelmed by English speaking tourists, where Medoc it is nearly imperative to conduct business.

Our first stop was in Fronsac to visit with the owner Brigitte Rullier of Château Dalem. Here, a unique soil known as “molasse de Fronsadais”– kind of windblown conglomerate of sand, clay and limestone with iron deposit formed the bed for the vines. Merlot is dominant here, though they like working with a little Cabernet Franc to give it some complexity and herbaceous accents (about 10%). This is an estate that is well received by negociants for en primeur, and their press is abundant. This is something Brigitte has worked very hard to achieve since assuming the estate from her father (who is 90 going on 50, by the way) in 2003. She also took more of an interest in the vineyard as the focus for making the wine versus the cellar and therefore saw a real need to practice organic at this time. Though AB certification is too costly for it to make sense, she is certified through ISO 14001– an environmental management system that allows her to prove herself dedicated to standards of environmental sustainability. For example, in 2016, parasites were a big problem in this area. She decided to take the clever approach of sexual confusion into her hands– by diffusing pheromones into the environment, males could not find their mates. Alas, love goes unrequited and extinct in her case for that season.

Her wines are quite dense and attractive from the bouquet to the last sip. They lack the rusticity I perhaps expected with novice appreciation for this area. From her more modest bottling of Château de la Huste (2011) to her offerings of Château Dalem (2014, 2013, 2011, 2001), there was a common texture of defined, structured tannins against refreshingly high acid– much more than I would normally assign to Merlot. And she picks quite late, which you feel in the fruit. Still, there was nothing overripe about these. The balance was impressive. Plus, I have a soft spot for those who can make 2013 look so good. Hers had a nice backbone, charming fruit and high toned elegance. She makes a point to dry her barrels one year longer than typical, which she said was 24 months (so she does 36). She does this for better oak integration, which for her first label is only 50% new french oak.

Leaving one ‘femme du vin’-inspired Château to another, Château des Tourtes in Blaye, much further north, is a property that two sisters seemed to accidentally fall in love with and take over from their parents, who began this winery in 1963, growing it from a mere 3 ha to now 70 ha. In her late teens, Emmanuelle Miller explains, the winery was the last place she wanted to return to after college. Yet, at the ripe age of twenty, nervous to know her parents were looking to sell, she warmed to the thought. She then used her persuasion a few years later to get her sister on board. Alas, she and her sister are obsessed with the business now and clearly wear passion in the way they talk about this region and its wine. The are part of ‘vigneron independent’, inviting two other wineries to join us over a wonderful lunch in their home– Château Bel Aire La Royere and Château Gamille Gaucheraud. The former is a run by a winemaker named Corrine Chevrier-Loriaud who left her family of all men in Cognac to make dry wine with a team of three other women to handle all the winery operations. She laughed and said she always was on a different path from her family. Her wines were stunning–very serious, structured and balanced. All the wines over lunch were such great representations of value and responsible farming in Bordeaux.

In Blaye, Merlot is very important, and here you see Cabernet Sauvignon rather than Cabernet Franc, as the latter cannot get ripe enough. Malbec and Petit Verdot are the ones that are beginning to trend. They explained that they are naturally lower yielding in the Blaye (sometimes 15 hl/ha in rough years), so in the middle of the last century it wasn’t practical. Then, it was quantity not quality. Even for Corrine, when she purchased her estate in 1992, she wanted to plant Malbec for its color and spice character. Many thought she was absurd. But she believes in preserving heritage varieties. She blends 35% into her Merlot, and it makes for a harmonious marriage. Now, there is a better understanding of where these grapes are best planted; reduced yields and higher quality is a value.

It was interesting to learn from Tourtes’ export manager that while the southeast Asian market is important for them, the United States, while certainly a market they intend to grow and nurture, is hardly where they limit their focus, as it is too particular, segregated and complicated to manage so many relationships. Nor does a national importer make sense for their brand. Instead of competing with all the Bordeaux available in highly engaged or mature markets, he would rather carve a niche for themselves and offer value to those through Africa that express interest in Bordeaux at a value right now. Places like Nigeria, the Ivory Coast and Cameroon offer more opportunity for business development.

Our final visit was the most unique. We went down to Bourg to meet with Didier Meneuvrier and his son Louis, a bright young man who clearly had the desire to differentiate from other in Bordeaux. It isn’t everyday a winemaker here admits that both he and his father prefer the Bourgogne way. I was intrigued…

We took a walk around the village to see the Dordogne hug the town tight. He explained that Bourg was one of the oldest wine villages and earned its reputation for incredible Merlot. Until WW2, they would send barrels across the river so the Château x could blend it into their wines. This was their purpose. In the middle of the century, they began to bottle their own wines under their own regional name. And although about 85% stays in France through trade and supermarket business according to their regional trade stats, exports are rising as they provide great value from Bordeaux. They get 10% more sunshine and 10-25% less rain.

Louis and his father make 3 wines. There is a traditional, buttoned up classic cuvee called Château la Croix David. It is a 10,000 bottle production made in a pretty straightforward way. They choose hilltop sites for deep soils that the roots can sink into deeply, draining the moisture that comes with ease. 90% Merlot and 10% Malbec see a modest 30% new french oak (225L) and a third that is one year and two year passed. The second is modeled after Didier’s personality and preference: La Marguerite. This 600 bottle production consists of 50% Merlot and 50% Malbec– it is a blend of the very best vines found on Ch la Croix David’s vineyards. This wine sees no new oak and experiences pigeage by hand in open top wooden vats. It was the most concentrated of the three. 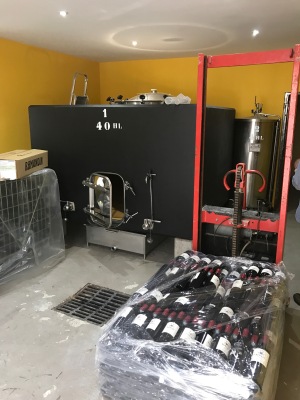 Finally, Louis introduced us to his baby: Burgus. This comes off 0.5 hectares of Merlot. After hand harvesting and a severe selection, he keeps whole berries destemmed and puts them in a custom designed concrete tank (3m x 2m x 2.5m)– a very wide short tank, as he only intends to punch down by hand, so he needs there to be more surface area to contact. He makes a pied de cuvee (20L) to promote the fermentation naturally. He covers the cap with monoxide ice cubes (20cm) so he can avoid sulphur. In fact, he really only adds a little come bottling time– a total of 10 ppm total SO2. I saw no one else doing this in Bordeaux–well maybe aside from Chateau le Puy to some degree. He was following the trends I am seeing so many do around the world with the natural wine movement. It was very fun to see his energy, seriousness and passion to try something different. The wine was very delicious, high toned and mineral driven. He has only made a couple vintages, so I look forward to following this talent as he continues to dive deep into his budding career. 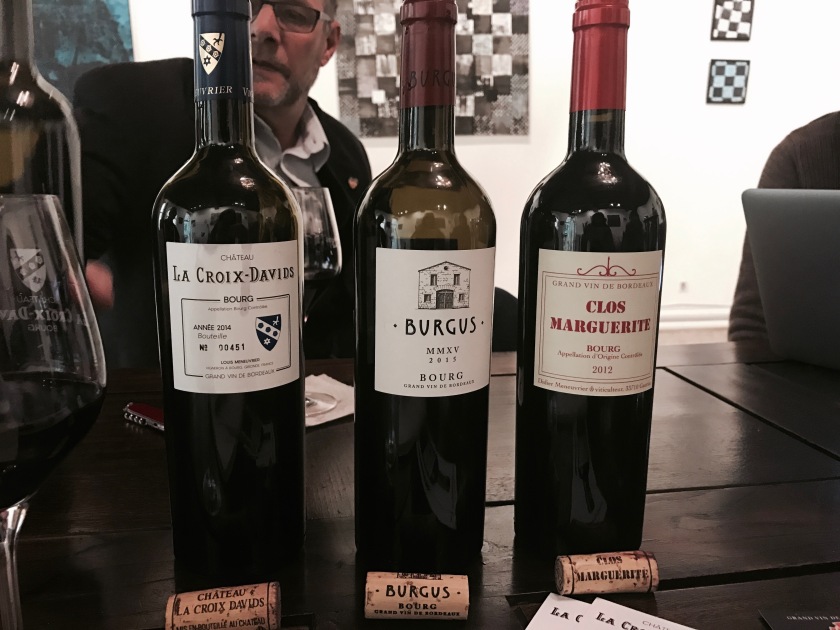